नमोऽच्युताय गुरवे विद्याविद्यास्वरूपिणे। शिष्यसन्मार्गपटवे कृपापीयूषसिन्धवे॥
namo'cyutāya gurave vidyāvidyāsvarūpiṇe | śiṣyasanmārgapaṭave kṛpāpīyūṣasindhave ||
×
In the lesson Foundation of Vedic Astrology, the first division of the body of Nārāyaṇa was divided into four parts. If we consider the entire body to be represented by an endless circle, then dividing by 4 would give quarters of 90° each. Let us use a special word called KENDRA for this. This Sanskrit word केन्द्र (kendra) simply means a center like a focus. If we talk of directions, then we have ONLY FOUR Cardinal directions – East, West, North and South. We call each of these a Kendra because at any point of time, when we face one of these directions, the other three directions completely go out of our vision. Try standing facing east and notice how much of west or north or south you can actually see when you are looking forward. Now, this is an exercise and everyone must attempt it –
There are four names mentioned – (1) Param-Brahma, (2) Maha-Vishnu, (3) Sada-Shiva and (4) Vāsudeva; I want each of you to think calmly and choose one of these names for one of these directions.

In order to reply to the question about the kendra and the four expansions of Nārāyaṇa, we need to have some information about some important charts used in vedic astrology.

First is Niṣeka, the copulation which produces the baby. The timing of this can be back calculated form the birth chart and it is a tedious process and the chart is called Niṣeka Chakra. However, what is of more relevance is the Conception chart called Ādhāna Chakra. In this chart the Lagna rising must be the sign which is the 7th house of the birth chart.

The birth chart, called Jātaka (from the word jāta, meaning birth) has the head of the native mapped to the first house. This sign is always opposite to the sign rising at the time of conception. At least this is the view of the majority of the maharṣi and jyotiṣa classics. For example, if the Lagna of a person is Pisces, then his Ādhāna (Conception) Lagna must have been Virgo, the 7th sign in his natal chart.

Finally when a native dies, his body is always kept with the head in the south direction as this is the direction of the god of death, Yama and the soul travels in this direction after death. A chart drawn for the moment of death is called Puṇya Chakra.

Coming to the concept related to the expansion of Nārāyaṇa, the evolver is Vāsudeva and the jīvātman is carried by him through the moment of birth. Birthing is associated with the concept of वाह (vāha) which literally means flowing and simultaneously bearing, conveying and carrying. This is an important word-stem in Sanskrit from which many words that we use in jyotiṣa spring up; Words like vivāha, vāhana or vāhaṇa all come from vāha and this is the action of the principal evolver Vāsudeva in his expansions. In order to accomplish this, we must mark Vāsudeva to be in the 7th bhāva from the ādhāna lagna, which becomes the janma lagna (ascendant) in the jātaka (birth chart). Sadāśiva is the parameṣṭhi guru who gives intelligence to all creatures. He must sit on the head to accomplish this enormous task. The brain is one of the few organs in the human body which has the power to regenerate and stay alive – this ability comes from Amarnāth Śiva. However, the head must ultimately control and harmonize all the parts of the being. For this purpose Sadāśiva expands in five forms. He starts from his seat on the head of the foetus in the west taking the form ‘Sadyojāta’ from where the impulses related to the creation of the being are triggered from the brain; then he moves to the north where he takes the form ‘Vāmadeva’ which is a joint form of Śiva and Viṣṇu; then to the east he takes the form ‘Tatpuruṣa’ to match the ‘Kālapuruṣa’ form of Vāsudeva; then to the south he takes the form of ‘Aghora’ which removes the blemish of impurity as the name implies anti-impurity and removes the blemish that will come when Brahma takes his seat here to create the body and all sorts of waste are produced. A final form of Sadāśiva is ‘Iśāna’ which is upward and out of this chakra which gives the permanent spiritual direction. When the creature is in peril this is automatically activated to bring about harmony between all the kendra so that it can survive and accomplish its tasks. From the above, it is obvious that Param-Brahma takes the form of Brahma the creator to create the body of the creature, for which purpose he must sit in the 4th house from ādhāna lagna. This represents the major part of the body – the torso.

Finally Mahā-Viṣṇu takes the form of Viṣṇu so that he can decide the delivery of the child, an act called ‘tāraṇa’ which means causing or enabling to cross the hurdle of being trapped in the womb and liberating the foetus from the murky womb it is trapped in. This concept continues into life and is the path of liberation from this world as well, for which we call him the avatāra.

Later we learn what happens to these devatā at birth and later. 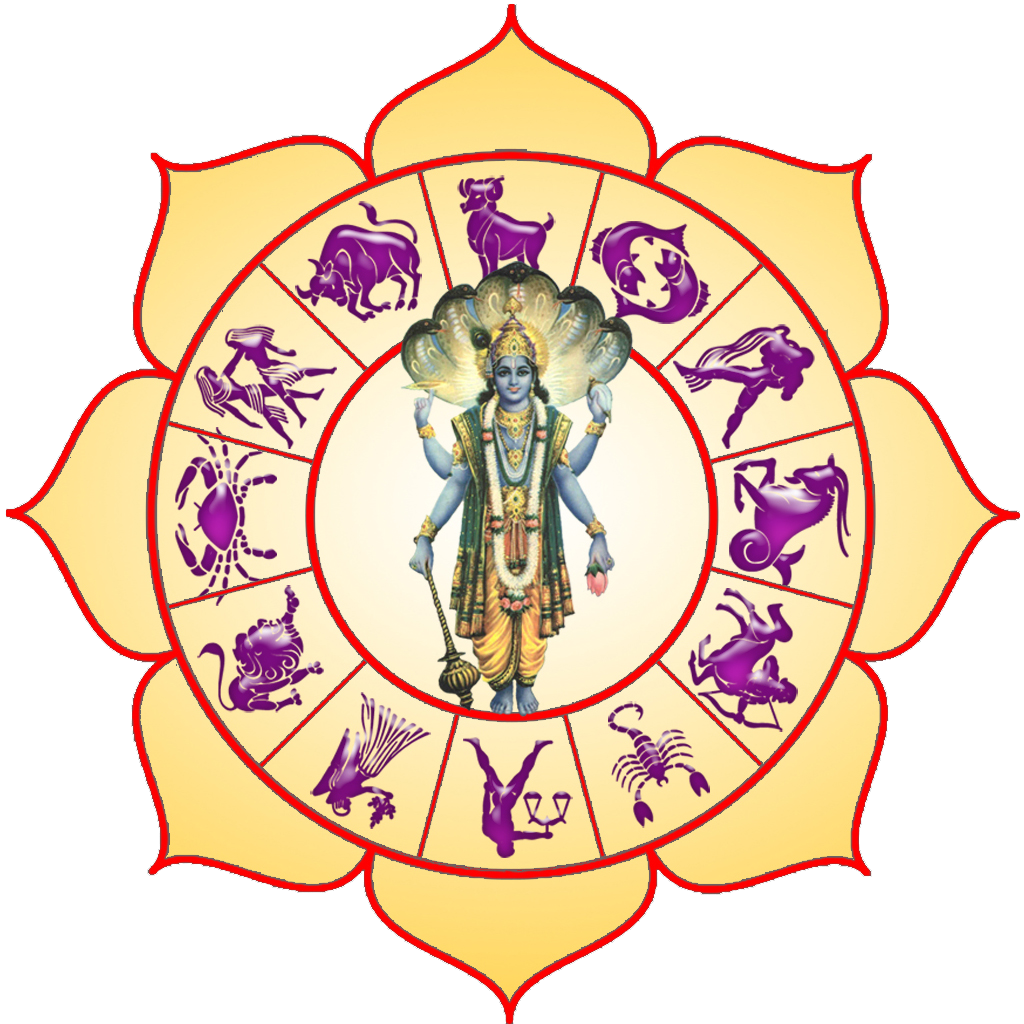